Millions of MDL were wasted, but no one was punished. From the very beginning, we will try to find out where the idea regarding the reconstruction of the public bath comes from:

On 8 June 2015, in the Dacia neighborhood, Renato Usatii made a public promise: A bath for the city, recreational areas for the “BAM” neighborhood. The news was posted on Renato Usatii’s official website. However, it was removed so that people would not remind him of unfulfilled promises: 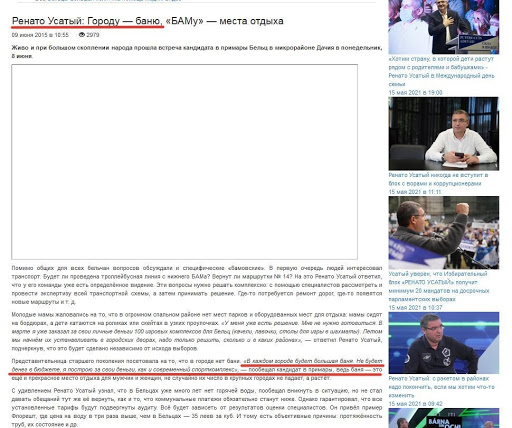 Now, error 404 appears instead of this piece of news on the website of the leader of “Our Party”: 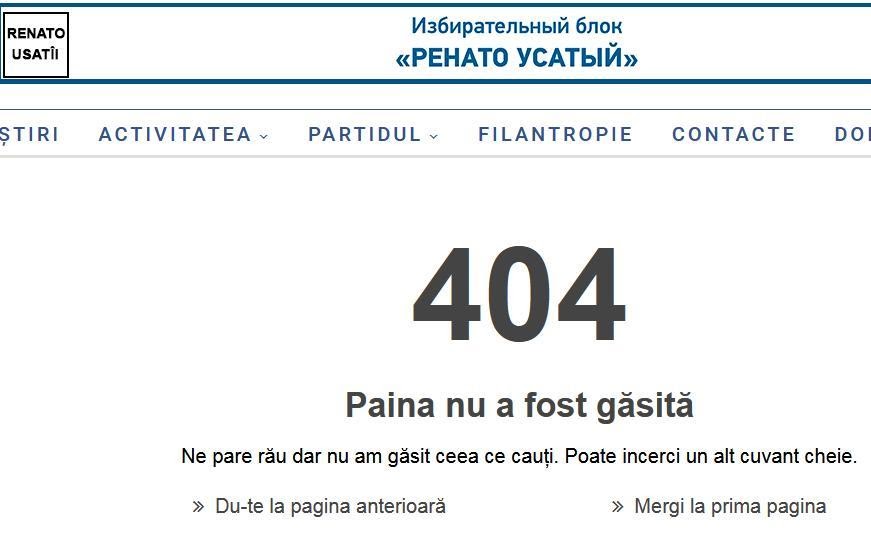 Two years later, in February 2017, the bath issue was brought up again. A new statement made by Renato Usatii from abroad.

All these wishes of Renato Usatii were for the first time laid on paper in the text of a Contract worth 15,000 MDL concluded between Balti Mayor’s Office and the State Enterprise “STATE SERVICE FOR VERIFICATION AND EXPERT ASSESSMENT OF DESIGNS AND CONSTRUCTIONS”, a Contract that provided for the procurement of services of expert assessment of the public bath building located at 3, Cicicalo Street: 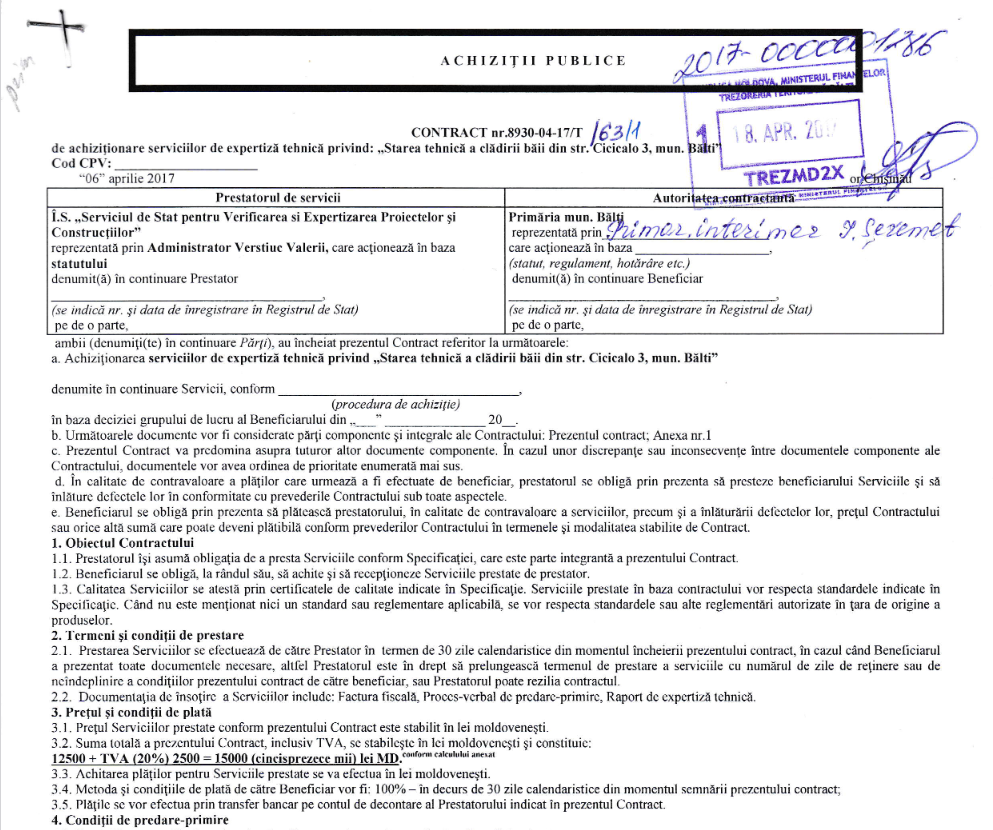 Later on, in December 2017, the idea began to be materialized by attracting money also from the city budget, as proved by a piece of news published on the website of a private television station controlled by “Our Party”: 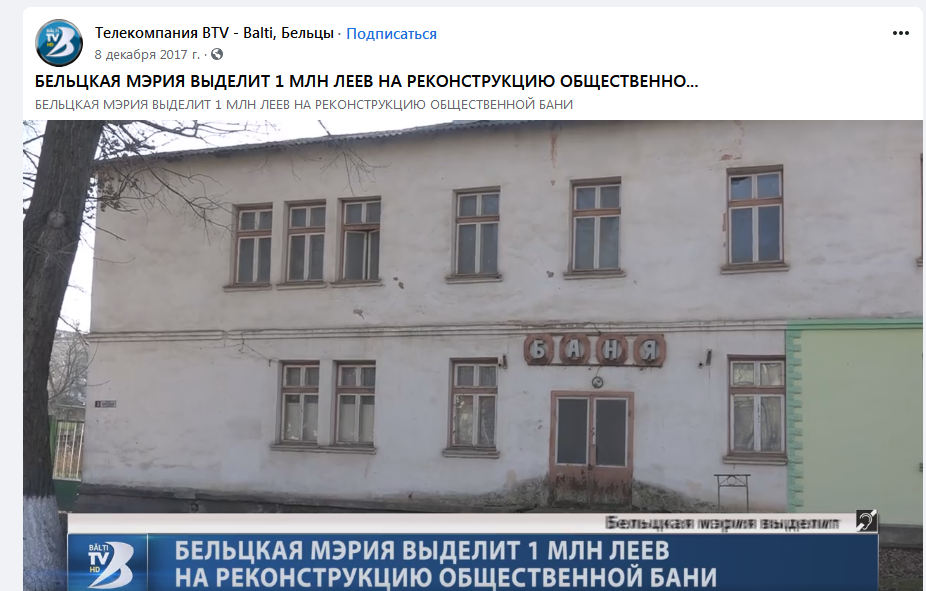 Based on the decision of the Balti Municipal Council taken at its extraordinary meeting on 08/12/2017, 1 million MDL was allocated for reconstruction. The money was provided in the budget for 2018. It is unclear how the money was spent, as the bath building remained in a deplorable condition.

At the meeting of the Mayor’s staff held on 16/03/2018 in the Balti Mayor’s Office, the issue regarding the reconstruction of the bath was raised again through the assignment of concrete tasks by the interim Mayor N. Grigorisin: 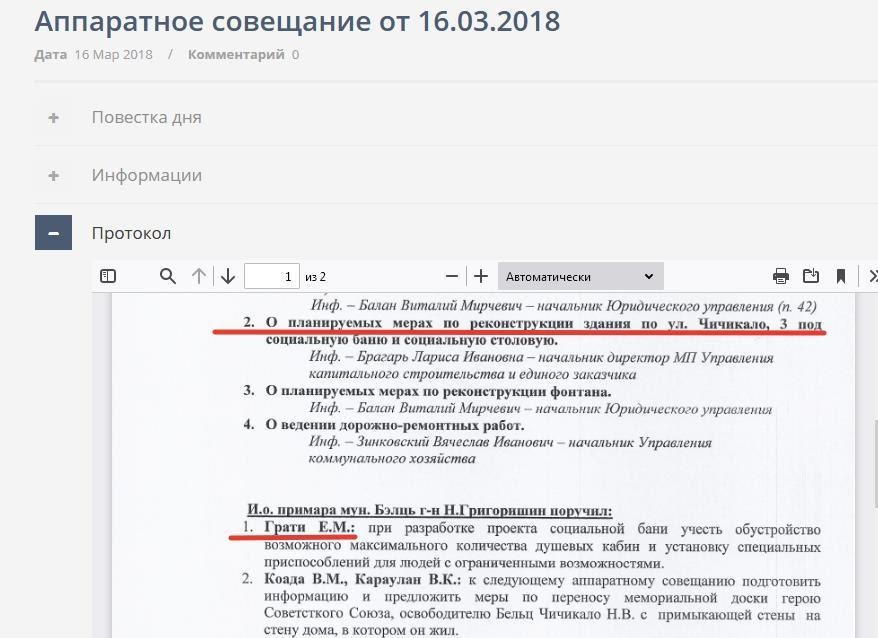 Already on 18 April 2018, Balti Mayor’s Office, represented by Nicolai Grigorisin, requested the Municipal Enterprise “Architectural and Planning Bureau”, represented by Mrs. Evghenia Grati, to prepare a design for the reconstruction of the bath. The cost of the design is 95 436 MDL. Subsequently, the design was prepared by the architect Tatiana Veselovscaia, former municipal councilor from “Our Party”: 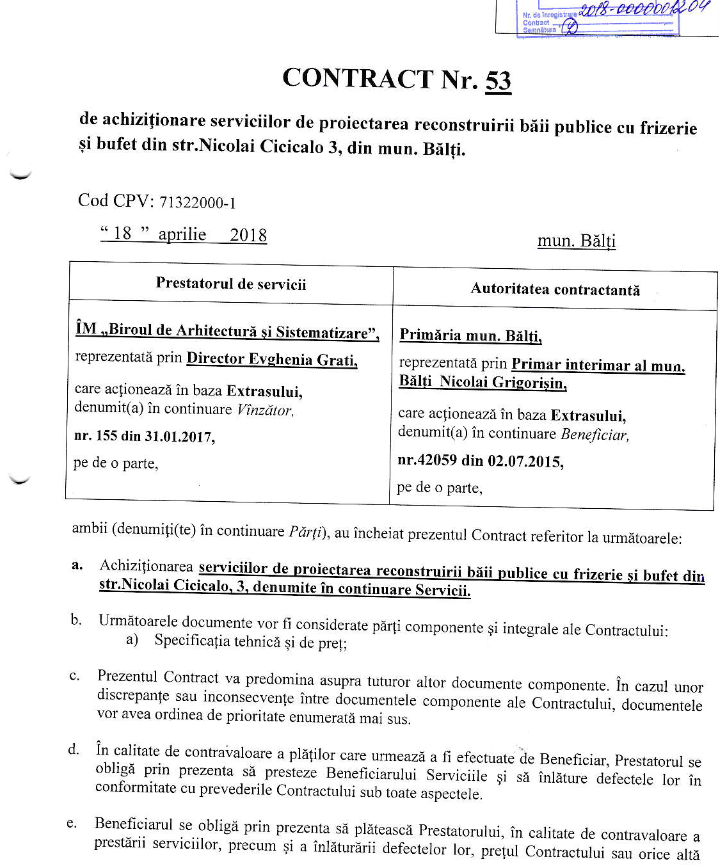 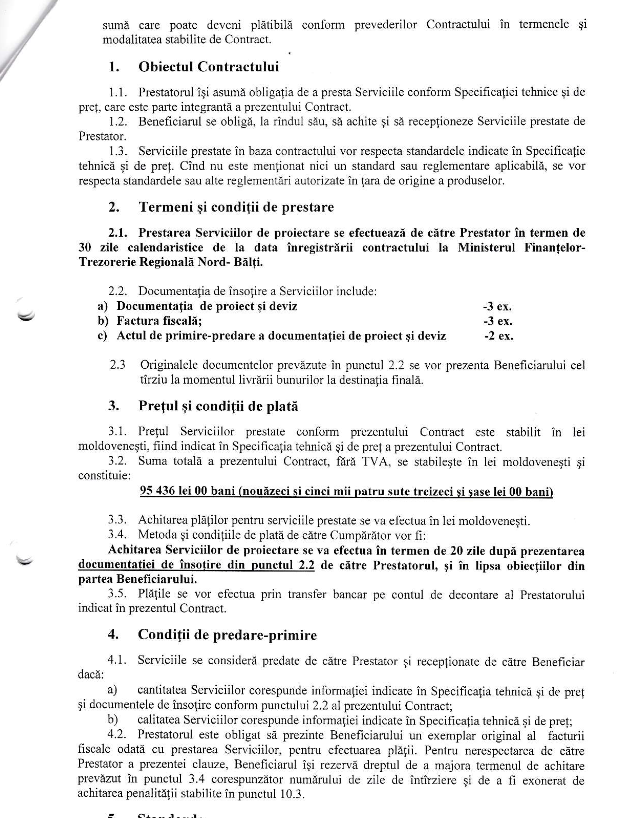 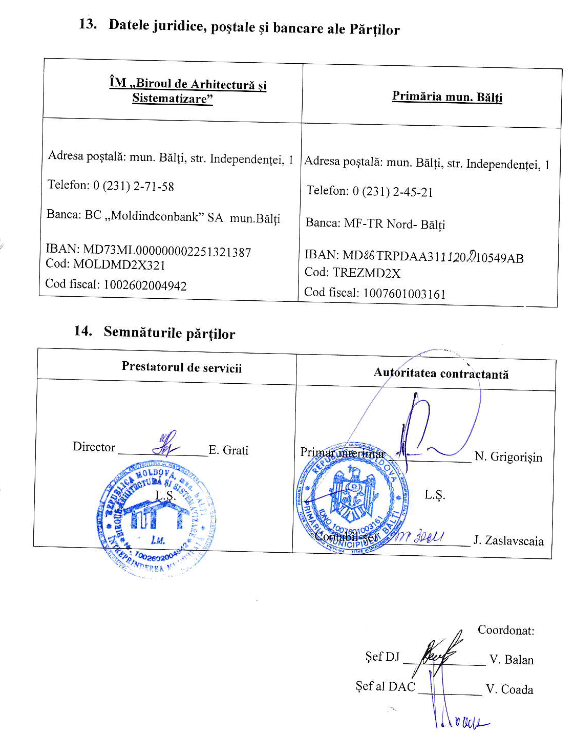 In the summer of 2018, Balti Mayor’s Office, represented by Nicolai Grigorisin, requested the expert assessment of the design for the reconstruction of the old bath from „SAVIM-COM” SRL, a company from Chisinau: 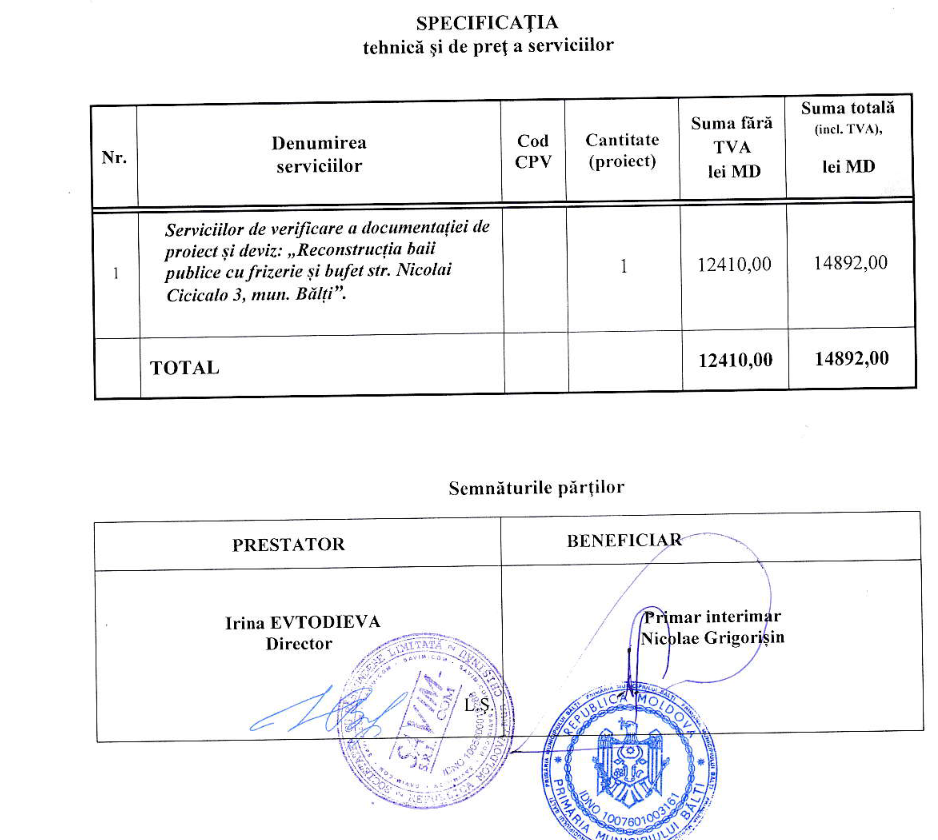 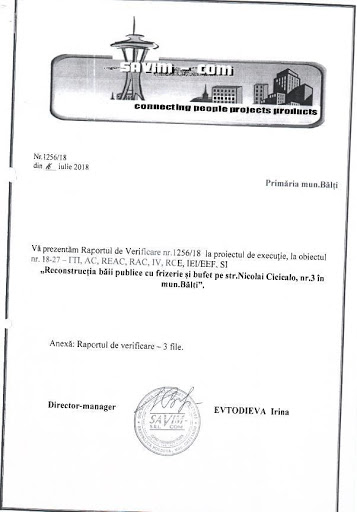 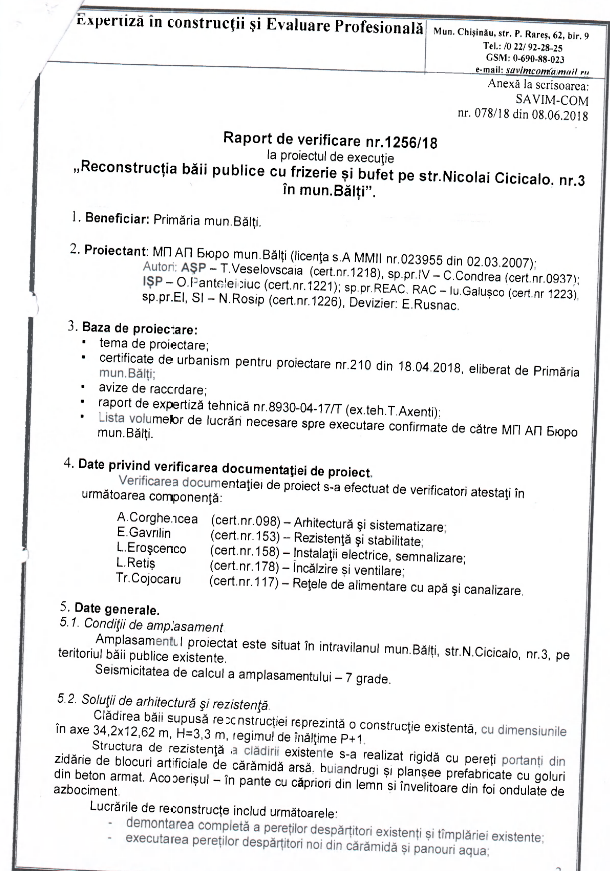 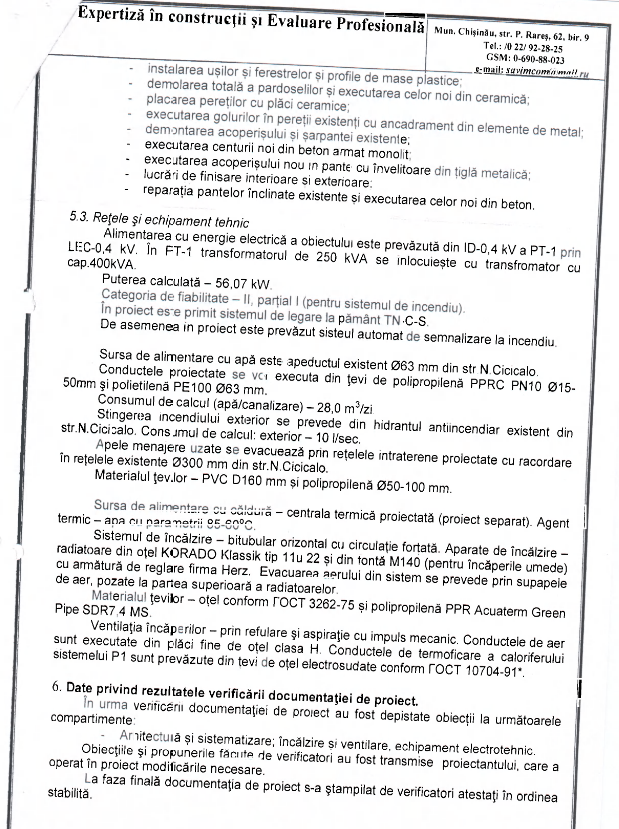 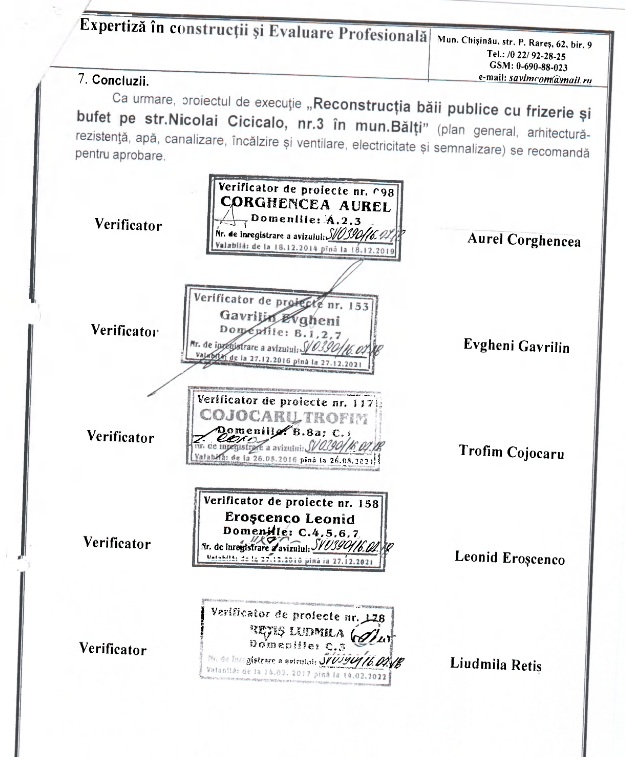 On 17 August 2018, Balti Mayor’s Office announced a public tender scheduled on 7 September for the reconstruction of the bath at 3, Cicicalo Street:

The public tender scheduled on 7 September was canceled after the disqualification of “Clemantin” SRL and was rescheduled on 16 October:

The company “AFLUX-Prim” SRL, which proposed to carry out repair works for an amount of 8.06 million MDL, funded from the budget of Balti city, was declared the winner of the public tender. The Contract is signed by Nicolai Grigorisin, representing the Balti Mayor’s Office: 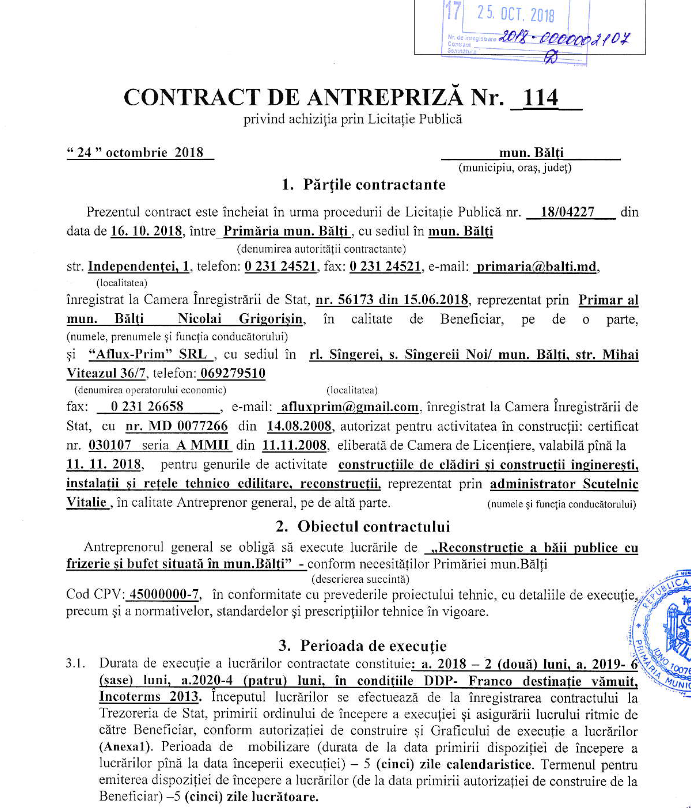 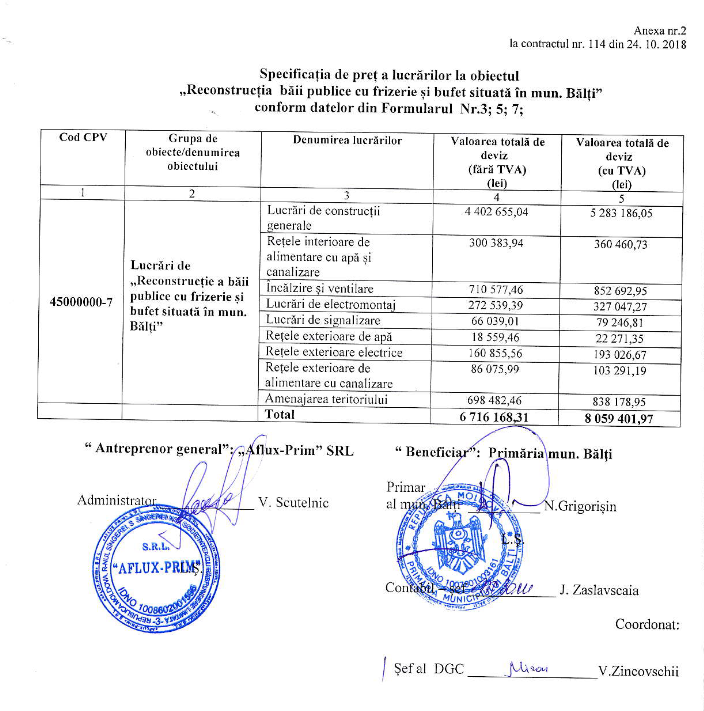 In the autumn of 2018, Balti Mayor’s Office, represented by Nicolai Grigorisin, concluded a Contract with the Municipal Enterprise “Architectural and Planning Bureau”, represented by Mrs. Evghenia Grati, for the procurement of services of designer’s supervision of the public bath reconstruction works. The service fee is 24 178 MDL: 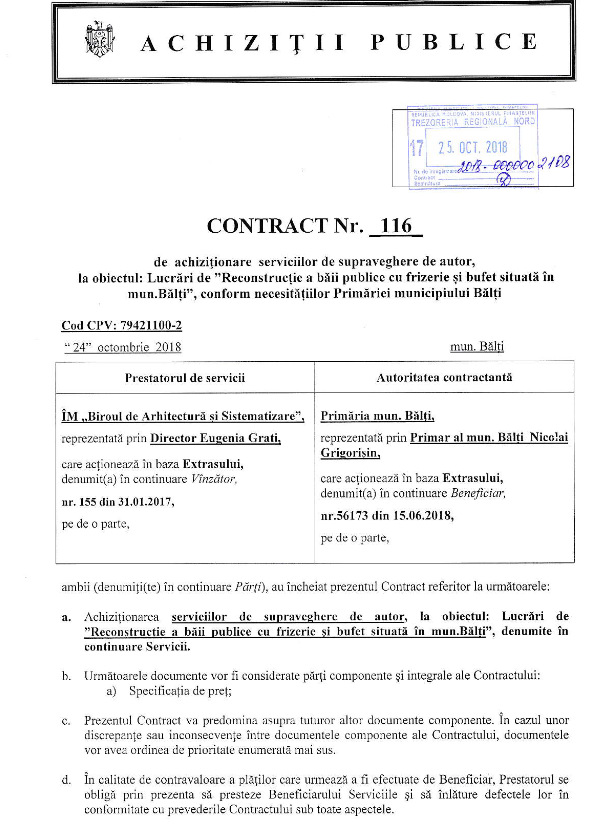 On 9 October 2018, Balti Mayor’s Office, represented by Nicolai Grigorisin, and „IPROCOM” SRL concluded a contract worth 92,006 MDL for the procurement of services to prepare the design documents for the gas supply to the public bath: 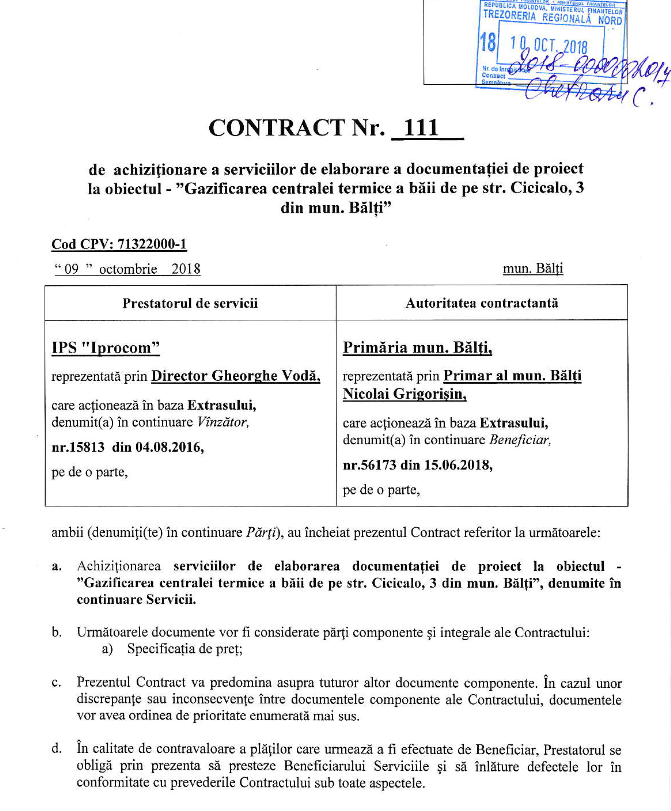 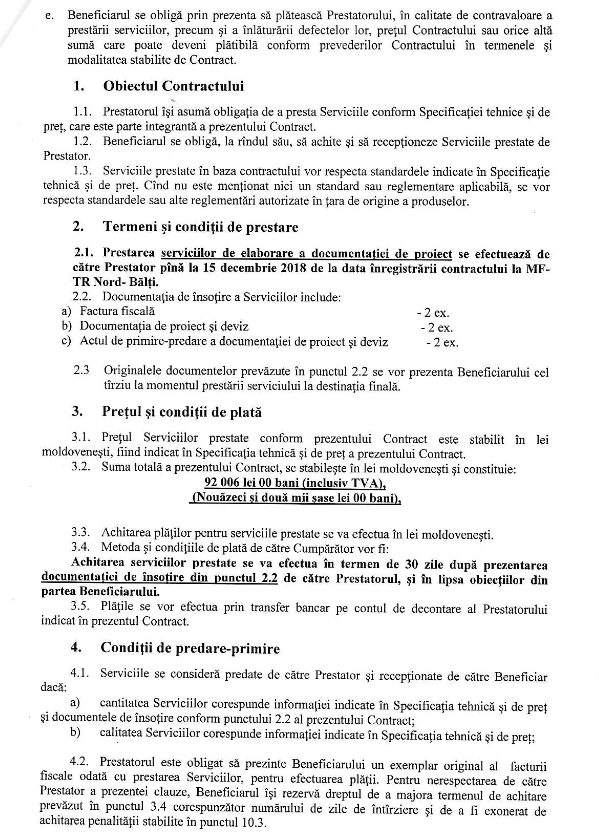 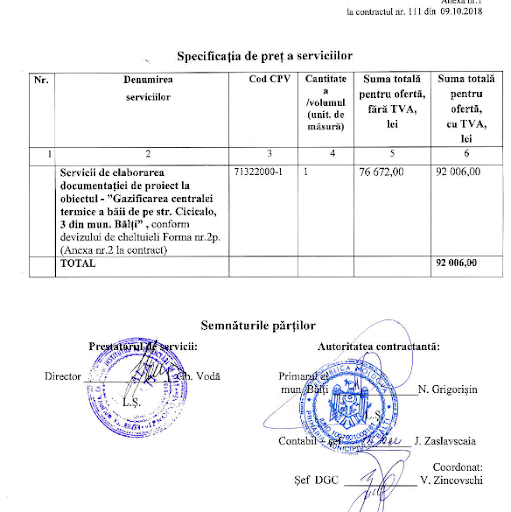 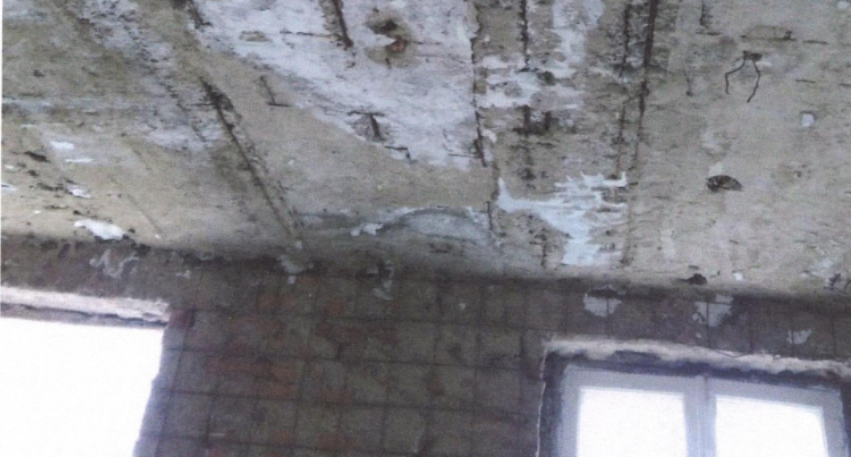 Subsequently, already after identifying the problem, the Director of the Municipal Enterprise “Architectural and Planning Bureau” Evghenia Grati wrote to Nicolai Grigorisin a memorandum on measures to reinforce the floor slabs of the public bath building:

“AFLUX-Prim” SRL spent 1,337,620 MDL from the city budget from the start to the end of the reconstruction works.

In fact, after the return of Renato Usatii to Balti in the summer of 2019, all the reconstruction works at the public bath were fully stopped. In an interview with a local media institution, the Deputy Mayor Nicolai Grigorisin said that the “bath” reconstruction project at 3 Cicicalo Street was stopped, and the employees of the Municipal Enterprise “Architectural and Planning Bureau” were guilty of that. In fact, it was them who issued the conclusion to authorize the repairs of that facility”.

On 25 February 2020, the Municipal Council chaired by Elena Gritco, dismissed one of those guilty of the failure of the public bath repair project, and namely the Head of the Municipal Enterprise “Architectural and Planning Bureau” Elena Grati based on her voluntary resignation request: 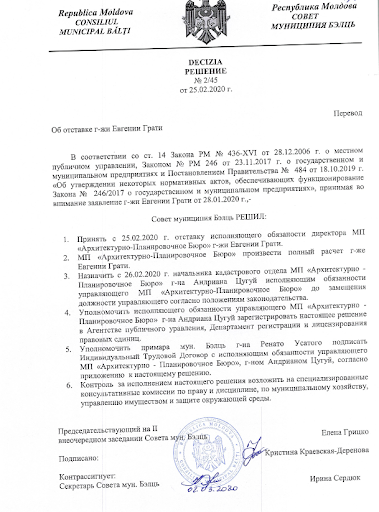 However, a month before submitting her “voluntary resignation”, the former Director of the Municipal Enterprise Evghenia Grati participated in and was announced the winner of the competition for employment in the Public Utilities Directorate (DGC) of the Mayor’s Office headed by Zincovshi. It should be noted that Evghenia Grati’s husband is also employed in that Directorate of the Mayor’s Office. Thus, the Municipal Council dismissed Mrs. Grati who, one month before resignation, was hired in a dream position in the Mayor’s Office: Even now, when the public bath stands as a monument for the money of Balti residents that was uselessly wasted, other funds are spent for its maintenance. Every month, 43.2 thousand MDL are allocated for the security of the abandoned construction site, which is confirmed by the following document: Based on this document, it can be deduced that from the moment the site was abandoned to present about 1 million MDL were spent from the city budget for the security of the facility, in addition to the previously incurred costs.

However, according to the private television station controlled by “Our Party”, the amount spent for security and protection of the public bath building is about 1 million MDL per year:

For example, the salary of a security guard is over 30,000 MDL per year: 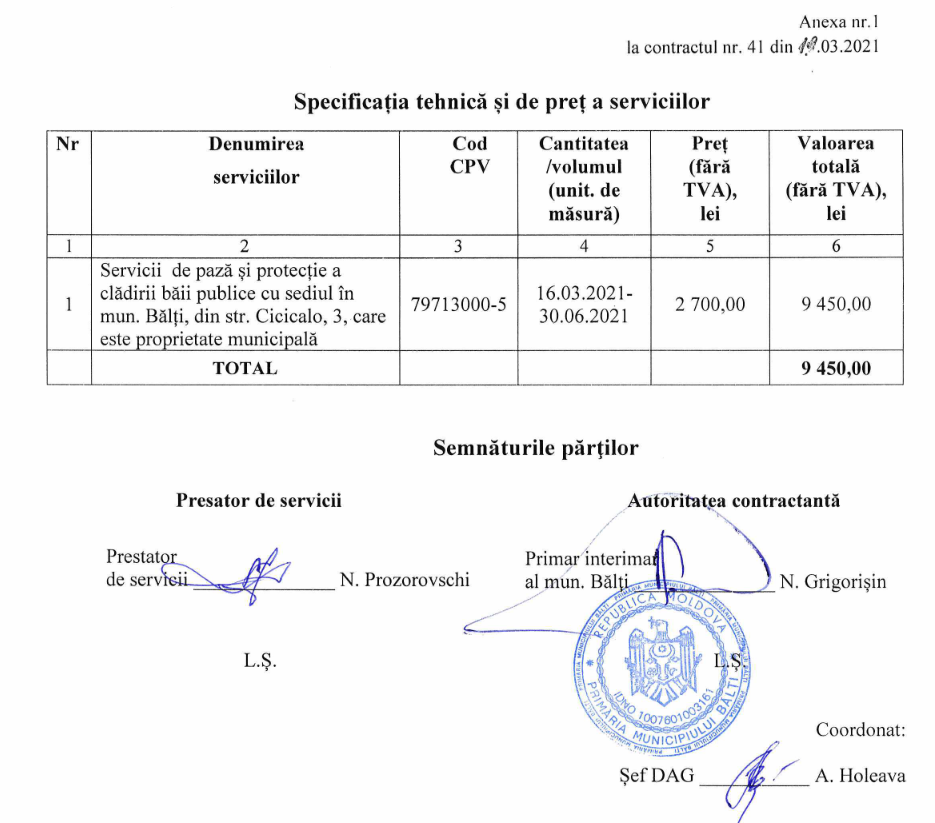 Currently, the local authorities plan to offer the public bath building for sale. That decision was taken during the extraordinary meeting of the Municipal Council on 27/04/2021.

Could an attempt to sell the unfinished project be treated as an attempt to recover the money? This action seems to be rather an attempt to cover up tracks for some well-prepared corruption schemes that were implemented from 2017 to 2021. This is particularly relevant when referring to the employment by Balti Mayor’s Office of the former Director of the “Architectural and Planning Bureau” Mrs. Evghenia Grati in the Public Utilities Directorate (DGC). Why was the former Director of the “Architectural and Planning Bureau” allowed to resign, even though the Municipal Enterprise was previously found guilty of the failure of the public bath reconstruction project? The resignation of Ms. Evghenia Grati from the position of Director of the Municipal Enterprise when the Mayor’s Office already offered her a position seems to be a show in which those who were guilty, instead of being punished, were covered up by the management of the Mayor’s Office.